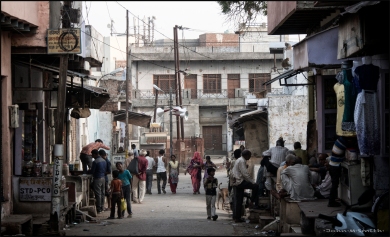 Photographically speaking Agra is a gem for street photography, but only if you are willing to go wandering around after seeing the Taj Mahal. I’ve seen the tourist buses draw up at all the tourist meccas and depart an hour later, often less, so that people rarely get the opportunity to explore. Rarely get the chance to see the real India.

There are those who are fearful of being challenged by poverty and by the dirty streets. Those who just want to say, “Oh yes, I’ve been to the Taj Mahal and The Golden Temple and The Pyramids and ,,,,”

…..but they haven’t given themselves the chance of smiling and saying hello…..always too busy to pass the time of day….

I think that attitude is sad.