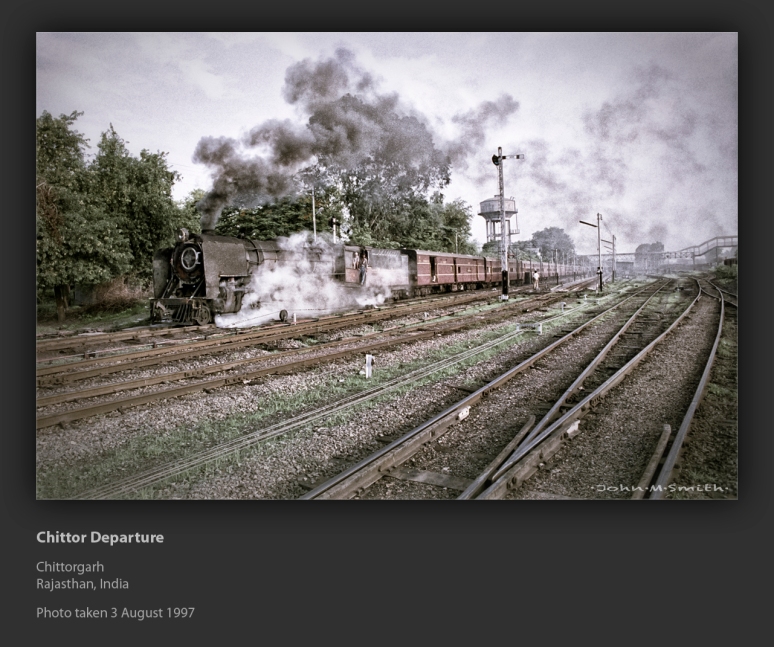 Woke early at 06.00 so at 06.30 decided to go to the station to watch the 07.15 steam departure. Walked down the rail tracks, through the station and photographed the train leaving in clouds of steam and smoke.

Returned to the hotel (Pratap Palce Hotel….. well recommended by tempo driver the previous day. R275…. much more than I normally pay…..once a skinflint always a skinflint……but comfortable place)

Had to wake up the guy in the hotel restaurant for breakfast at 08.00……I was on a schedule…..no use travelling without a schedule……..and had toast and lemon tea. Got changed, then went out at 09.00 for a trip around the fort with yesterday’s tempo driver….. a tempo is a 3 wheeled rickshaw with an extra rear facing seat.  The tour took two and a half hours and we visited many temples, towers and palaces…..a pleasant place with a fresh breeze calming the fierce sun.

Returned to the hotel at 11.30 and had lunch. In the late afternoon returned to the engine shed and spent one and a half hours doing a drawing of one of the steam engines. The staff kept me supplied with cups of cold water served in a tin cup. Returned to the hotel for an evening meal then spent the rest of the time talking to a French couple.

This was a very brief diary entry, they usually ran to several pages.