Clouds in the North 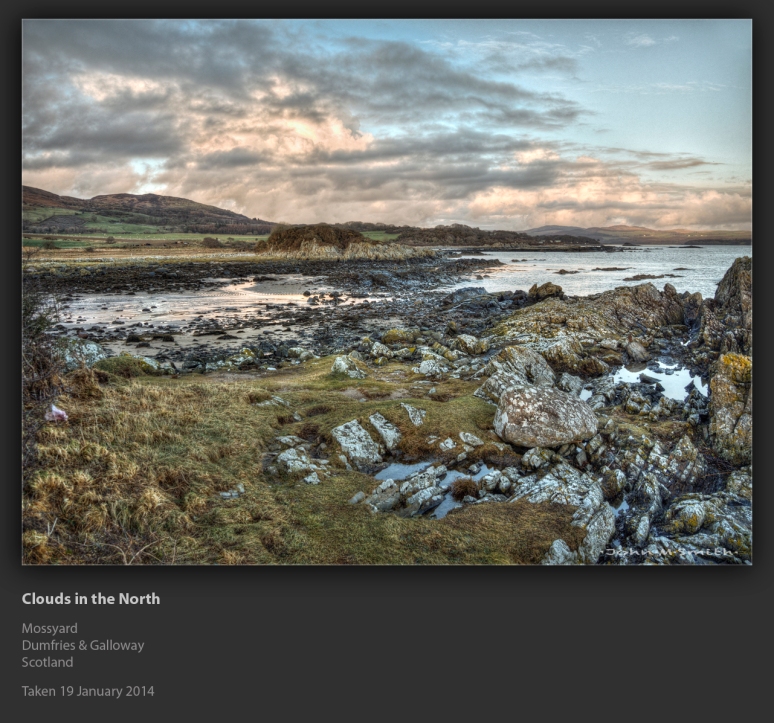 Working on a batch of photos is leading me into posting another series, and this view is the second one in a sequence of five, all taken along the coast at Mossyard in Dumfries & Galloway.

Working in such a way is giving me the opportunity to find different ways of processing a range of landscape images and each one poses different kinds of problems in managing the varying dynamics of light and colour. Having just finished post processing the rest of this set, I return to this one and can see that, whereas I may have resolved similar issues with some of the later pictures, this one doesn’t quite achieve the balance that I was hoping for.

So in critiquing my own work; I feel that this one is too fussy and though the contrasts may be reasonably right for the foreground, there needs to be greater aerial perspective or less contrast for the middle ground and more distant parts. Also I was undecided how to deal with the colour in this image. The sky was strongly lit by the setting sun and getting this to balance with the colours of the landscape hasn’t worked as well as I had hoped. Maybe reducing the colour saturation would have worked, or even the opposite. I did tentatively experiment with both and then lost my way in the middle ground. Perhaps cropping some of the sky would have worked so that the focus was more on the landscape instead of being split between the two.

Now you may think that the picture is fine as it is….and that’s o.k. but hopefully, in exposing my thinking about the picture, you will begin to appreciate that I am trying to resolve my photography by experimentation. In this I follow, very tentatively, in the footsteps of the greatest exponent of landscape photography, that of Ansel Adams who spent up to a week in the darkroom perfecting the printing of just one photo, so that his darkroom assistant could reproduce exactly what Ansel wanted from each negative. Of course The Master worked primarily in black and white, so perhaps that’s the way this one should have gone.

This is the continuing story of how I present my photos. Sometimes there’s a clear vision, and more often there’s a lot of uncertainty and fudging.

3 thoughts on “Clouds in the North”