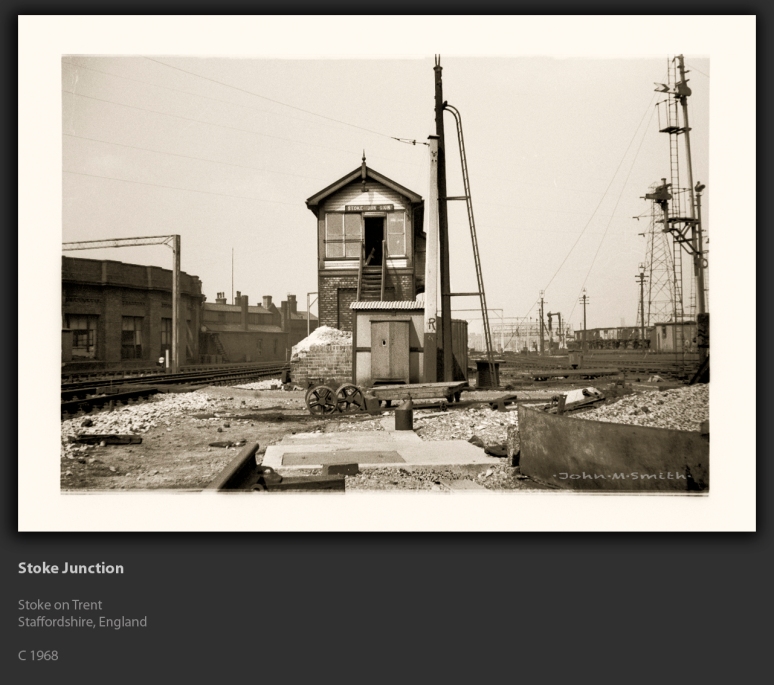 Since preparing this slide I have become more certain that it wasn’t 1968, but a year earlier. 1967 was a good year. I was courting back in West Bromwich at the weekends and studying through the week in Stoke, so it’s surprising that I found the time to photograph the railway scene in the area at all. I took some cine film at Madeley Junction and at the station, but visited the engine shed only once. It must have been a Sunday as the place was pretty much deserted and unusually I wasn’t challenged about being there, though I did call in at the shed office. The photograph was taken on my Halina 35x which cost £7-13-6 and was bought on the earnings from my Saturday job at Lewis’s Department Store in Birmingham. Some of the negatives, including shed interior views, have yet to be found

There’s a deep melancholy in monochrome photographs anyway, and they show a world that is now beyond experience. They show a complex and rich infrastructure that died at Stoke later that same year, for steam on the main line railways in the UK. went completely in August 1968 and Stoke shed was one of the few that still echoed to the sights and sounds of steam. Yes, it was old technology; it certainly was dirty, ill maintained; and the pride in being a railway man was at a low ebb, but it was, even then, magnificent and I regret deeply that I can’t walk through the cinders, feel the heat from the boilers, hear the sizzle and splutter of the steam, and smell the oil and smoke.

I still have that camera.

Maybe I will post some more of these scenes. Sorry there’s no steam engine in this one.